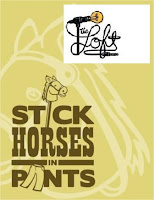 Take a look at the great entertainment we have in the Colorado Springs area. Locally, we have an improv comedy troupe who have won awards for Best Live Comedy, Best Artist, Best Actor (Toby Lorenc) and Actress (Lacey Maynard), Best Theater Troupe, and the list goes on.

The Stick Horses in Pants provide a great alternative to expensive movies and other entertainment. Most of their shows are $10 or less for adults and you get to be actively involved with their spontaneous, clean comedy (however, they are very gracious to not involve you if you don't want to be in the spotlight). All their content is created by the audience, starting each game with an "ask" (a.k.a audience suggestion) and then creating an impromptu scene based on the suggestion.

It's a great night out for a date, family, or just friends. Now, the Stick Horses has partnered with The Loft Music Venue to book the 2nd Friday of each month for an hour-and-a-half comedy show. The shows start at 8:00pm and usually run until almost 10:00pm with a small intermission.

Although there are several improv groups in the Colorado Springs area, the Stick Horses are different. Their shows are clean and family friendly. And...they're actually amazing entertainment for this community. I've seen improv on cruise ships, major cities, and top-notch conferences but these guys are better than any of the groups I've seen.

The group has been together since 2004 and you can tell they "know one another." They work well together and put on an amazing, entertaining show.

Take a look at their upcoming dates:

Friday, April 12 2013:
You can save a little money by purchasing tickets online through the Loft, but even if you buy tickets at the door ($10 each) it's totally worth the price for over an hour of side-splitting entertainment.